Chinese official micro-level data on income distribution are difficult to get and of questionable reliability. The best source are urban and rural nation-wide household surveys (HS) that have been running since at least 1982 (”at least” is a qualifier because the surveys have been fielded from 1954, but, were discontinued during the Cultural Revolution and, as far as I know, the data from these earlier years been lost).  HS was composed of two distinct parts, one for urban and another for rural population. They were not exactly the same surveys and putting them together to obtain China-wide results, which was done only by the National Bureau of Statistical (NBS), was hard and never fully explained. Since 2013, however, the two surveys were folded into one with the same questionnaire, so in principle the results should be much more reliable. However, a presumably better survey was accompanied by as apparent clamp-down on data release so that even fewer numbers from this new survey are released in the official publications like Chinese Statistical Yearbooks. This is unfortunate because the Chinese official survey, like in almost all countries, is the best source of income data thanks to the its coverage of all Chinese provinces, large sample size, and experienced numerators.
A sample from within the HS, with micro data available, has been in existence since 1988. It is called Chinese Household Income Project (CHIP) and is run by the Chinese Academy of Social Sciences. (The discussions of various surveys, including a recent proliferation of surveys conducted by public institutions, mostly universities, and generally covering only a part of China are provided here, here and here.) CHIP is considered the best available survey because it “originates” from within the NBS,  is relatively large (2013 survey includes about 18,000 households), covers most of China (15 provinces comprising 63% of the Chinese population) and, most importantly, researchers have access to individual (household-level) data. It is this survey that Luxembourg Income Study (LIS) uses as representative of China and harmonizes its income and other data with those for other countries. It is therefore probably the best survey to study the changes in income distribution in China, and is certainly the best survey to compare China with other countries (because LIS makes variable definitions the same and thus comparable across the countries). LIS has harmonized 2002-3 CHIP, and has recently harmonized and added the 2013 CHIP.  This is a big event not only because we now have two years for China but because the 2013 CHIP data are coming from the “unified” national 2013 survey.
In this post I will look at two things: (1) how has Chinese income distribution changed between 2002-3 (called for simplicity 2002) and 2013, and (2) how does Chinese income distribution compare with American.
Figure below shows, on the vertical axis, the annualized change in real household per capita disposable (after tax) income between 2002 and 2013 and on the horizontal axis percentiles of income distribution, from the poorest (on the left) to the richest. (In my tweet from several days ago, I showed this graph but wrongly used the unrevised 2002 figures. LIS has in the meantime done some improvements on 2002 data and the graph below is based on the “correct”, i.e. revised 2002 version.) The average annual inflation-adjusted growth rate was 9.3%. As the graph shows, the rate was fairly similar across income distribution, with highest growth rate however among the middle of the income distribution. People between the 30th and 60th percentile saw their incomes rise by more than 10% per annum. (At that rate, you double your income every 7 years.) There was also an uptick of growth at the very top of the income distribution. 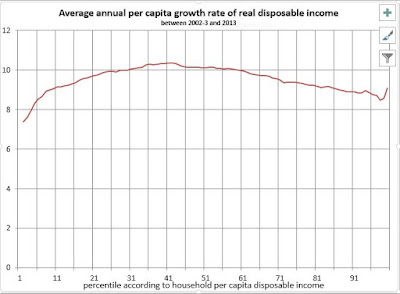 Such relatively even growth across income distribution left the Gini coefficient almost unchanged: it decreased modestly from 0.45 to 0.43. This stability/slight decline of inequality agrees with results from other surveys (including the government-produced Ginis published without any discussion of how they were obtained) and the evidence that shows that wages of low-skill workers or sectors are rising faster than wages of high-skill workers and sectors. All of these relatively equalizing developments are observable from around the turn of the century. Note however that Chinese inequality, even if not increasing, is very high. It is higher than the US inequality:  US Gini coefficient for 2013, calculated from LIS-harmonized data and using the same per capita definition as for China, is 0.41.
How far has Chinese income distribution converged toward American, in other words how much have the Chinese (since their incomes have obviously grown much faster than the incomes of Americans) become more similar to the Americans? Two graphs, for the years around 2002 and for 2013, display this in a rather dramatic fashion. The horizontal axis gives disposable per capita income in international (PPP) dollars, so that having $100 in China is equivalent, in terms of purchasing power, to having $100 in the United States. (The axis is shown in logs.) This makes comparison of incomes possible. It is obvious, even by a simple visual inspection, that Chinese incomes have “moved” much more closely to American incomes by 2013, than they were in 2002. 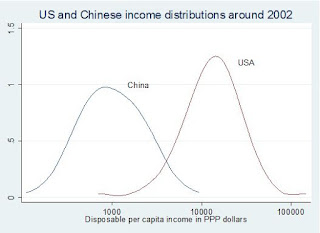 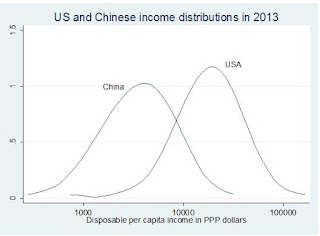